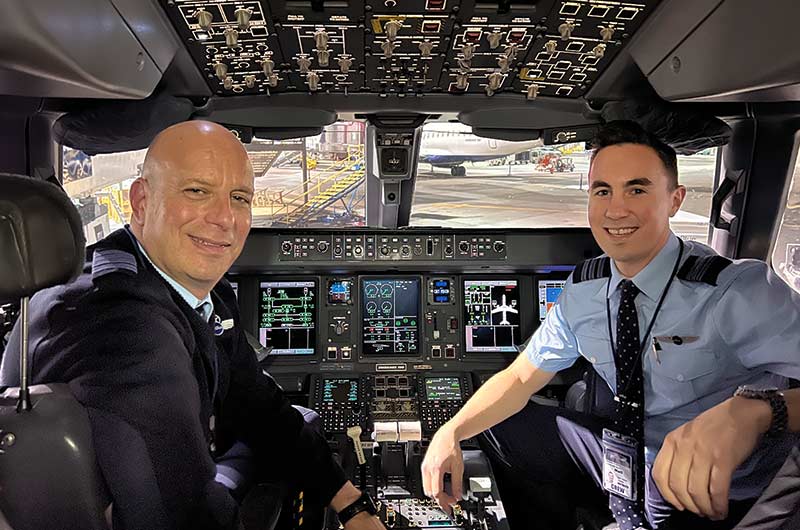 Capt. Ken Hertz (JetBlue), left, and F/O Matt Hurley, also a volunteer for Above the Clouds, on the flight deck of an E190.

A different perspective and a little encouragement can go a long way to help those in need. Capt. Ken Hertz (JetBlue) learned this firsthand as an Above the Clouds volunteer. “It’s been an incredibly uplifting and rewarding experience,” he commented. Looking back at his nearly eight years with the charitable organization, he added, “Actually, I feel like I get more out of it than I put in.”

Above the Clouds is a Boston, Mass.-based nonprofit organization that “brings joy and hope through the wonder of flight to children and teens who have a serious illness or disability, are underserved, or facing other serious adversity.” The charity offers these individuals flying opportunities through its Dream Flyers, Discovery Flyers, and STEM Cadet Flyers programs. The organization also introduced a new Dream Flyover program to ensure it could maintain its outreach efforts during the current pandemic.

Above the Clouds works with Boston-area social services agencies and conducts presentations at local high schools to ensure that young people in the community have access to and can take advantage of this unique opportunity. Most of the charity’s pilots fly their own aircraft, but Above the Clouds owns a four-seat Piper Warrior for other pilots who want to volunteer their time.

Hertz is a ground-based flight coordinator for the organization but has held several positions, including member of the board of directors and pilot/mentor volunteer—the latter of which he’s found the most gratifying. Assisting with the Discovery Flyers program, he’s been paired with at-risk teenagers. “It’s like a Big Brothers/Big Sisters network, but with an aviation twist,” he said. “We use the excitement of flying to engage these kids and expose them to this whole new possibility for their futures.”

During Discovery Flights, young participants, who in many cases have never flown before, are given the opportunity to briefly fly an aircraft from the copilot’s seat. “They’re at the center of this activity, which is being orchestrated for their benefit, and it’s a powerful experience,” Hertz commented. “The kids take control of the plane. They turn, they climb, they descend. They look down at their school or home.”

The main base of operations for Above the Clouds is Norwood Memorial Airport in Norwood, Mass. With clearance from local air traffic control, the charity provides aerial tours of nearby Boston for these kids. They fly over the Charles River and do passes over Fenway Park and the city’s office buildings. Hertz observed, “Almost everyone comes away from this experience with a smile.” 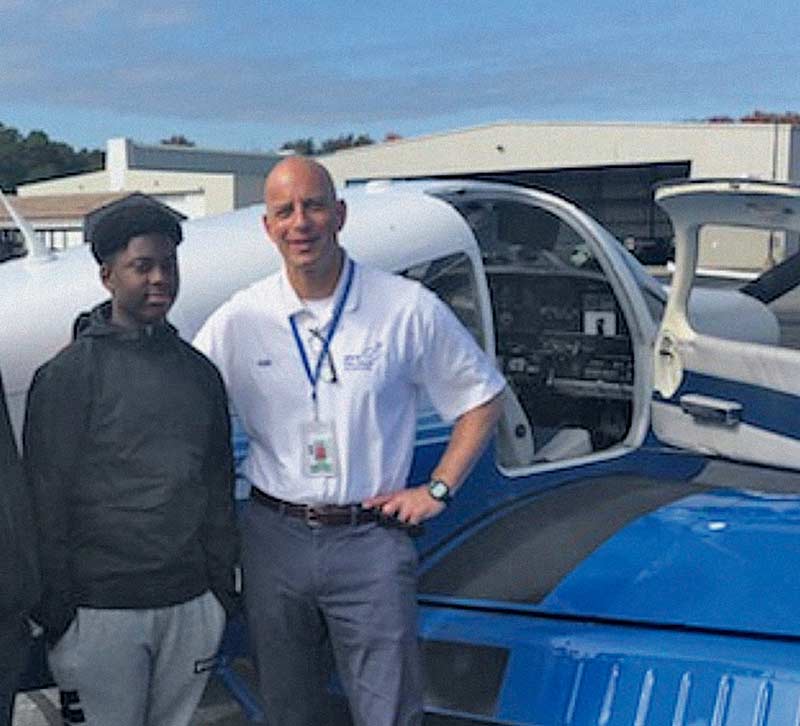 Hertz and a student prepare to take a Discovery Flight over Boston, Mass.

Hertz noted that several years ago, a teenager from Quincy, Mass., came to Above the Clouds through an area social services program. In time, he earned a scholarship and graduated from a university with an accredited aviation program. Hertz remarked that it wasn’t long before this same young man joined Above the Cloud’s volunteer pilot ranks and flew another Boston-area youth from the social services program. Since then, the Quincy native has become an airline pilot.

Hertz was fortunate to develop his own interest in flying thanks to the help of his own mentor. A teacher and World War II vet, Ed McIlhenny, at his high school offered an elective class in flying. McIlhenny salvaged a 1930s-era simulator known as a Link Trainer, which he set up in the school’s basement. His course covered the basics of aviation including meteorology, and at the end of the year the students got the chance to go flying.

While in his early 20s, Hertz rekindled this interest when he ran into McIlhenny in Port Washington, N.Y., and after a brief conversation, he agreed to help Hertz earn his ratings and certificates. Hertz later quit his job and has since flown for five airlines, including TWA and US Air.

It’s been said that a mentor is someone who allows us to see the hope we hold inside ourselves. No doubt, Hertz and other Above the Clouds volunteers have broadened the horizons of countless Boston-area young people, providing them a glimpse of what could be a brighter tomorrow.

Learn more about the positive impact Above the Clouds is making in the lives of at-risk kids or volunteer/donate.

This article was originally published in the March 2022 issue of Air Line Pilot.

Channel 5 -Valeria is so Excited for her Dream Flight

Above the Clouds National Grant Award from JetBlue Foundation